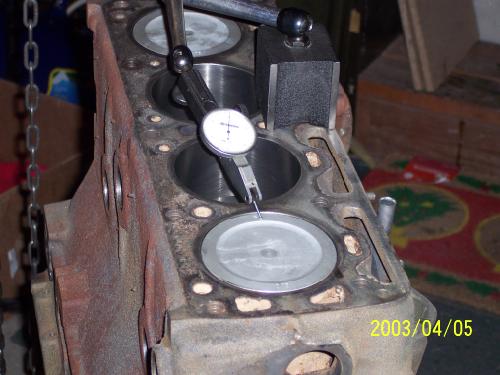 First off, let me say that there are many ways to arrive at what you want in a Stroker engine. My way is certainly not the only way and some of the things I did may irk some folks but I have a streak in me that all you have to do is say "you can't do that fool" and I'll do it just to spite you. The Stroker has approx. 500 miles on it now and all is well except for a persistant and unknown location oil leak that is a nuisance but not a real problem.

How did I do it? In a nutshell the following:

• 2L crank from Florida. I had to shorten the 2L crank nose. I have a 13x40 Jet lathe and Grizzly milling machine and was able to part-off the nose to the correct length and machine a new single slot for the keyway. I was unable to drill and tap the nose though due to not having the correct centers to support the crank properly so took it to a local machinist and he charged me $50 to do this. We changed the thread to 5/8x24 and I used a hardened bolt and torqued to 140 lbs. I used the entire Motor Power timing set (cam gear, crank gear, chain, tensioner). The H20 crank gear had a .005 larger keyway slot in it than did the crank pulley from the 1600 so I had to make a double width keyway to allow for this.

• 2L rods from Idaho. Honest to goodness H20 dished top +.030 pistons from Motor power. Hastings cast iron rings and the H20 wrist pins and circlips. My engine machinist was Kevin from Precision Balancing here in nearby Otis Orchards, WA. He was impressed with the quality of the pistons and felt that they would hold up as well as anything he had worked with. I used these pistons because the original 2L flattops available from the vendors were $400 plus; some coming with rings, some not. A local fella loned me one of his original pistons and Kevin and I compared them visually and weighed them too. The H20's were 14 grams lighter than the flattops, probably due to the dish in them, and otherwise seemed identical to the flattops. During the balancing procedure, Kevin's worksheet shows that there was only 1 gram difference between the heaviest and lightest pistons.

• I calulated that the dish takes up 5.6 cc's. A complete H20 gasket set from Motor Power completed the package. The front seal included was way too big so I called and Danny found one that is for the old, old, old H20 forklift engine that is the same as the 1600 front cover seal.

• The aluminum head was rebuilt and we put in new hardened steel intake seats for unleaded fuel. I port matched the head to the gasket and also ground out the exaust manifold to get rid of the tabs of metal that interfere with flow. See pics. The head was left stock otherwise.

Preassembly figuring; I cc'd the head and found the chambers to hold 53 cc's. This is much bigger volume than the 45.8 cc chambers of the 2L head. I used a program I found online to calculate compression ratio and determined that if I was using the H20 pistons, I would have to shave the head and maybe the block and/or play with thinner than normal head gaskets.

Assembly; all parts were magifluxed and balanced. Kevin convinced me that we needed to shave the block by .055 to raise the piston .030out of the hole at TDC in order to get good quench. This was done as well as shaving the head by .020 to give a final compression ratio of 9.11 to one. The stock H20 head gasket and exhaust/intake gasket were used. I used Dean's studded head set and torgued to 65 lbs.

In mocking up this engine, Kevin and I found too much clearance on the mains so the block was line bored and the crank reground to get .0014 clearance. By the time all these used parts were put together, I figure I have a blueprinted and balanced engine, .010 under on the rods and .020 under on the mains. Again, Motor Power H20 bearings were used throughout the engine.

I was going to use an electric fuel pump but due to time and $$ I used the stock fuel pump.

The camshaft was reground by American Cam Regrinding. His info sheet calls for .015 clearances intake and exhaust. I struck a compromise between that and the stock .017 and set mine up at .016. I have an L20b in my 71 510 and am strongly considering taking one of my camshaft cores to American for this engine too as response on the Stroker is great.

I used my own converted EI dizzy from a 1980 200SX and set the timing at 15 degrees BTDC. I may increase this later but for now the engine gets 26 mpg at 75-80 mph, is very responsive and smooth as silk, most likely due to the balancing. I've not taken it over 5000 yet but it gets there in a hurry.

I am very happy with the new Stroker. I have the L20b overhead cam 2L engine and this 2L stroker pushrod engine and can't tell any difference in noise or performance. I can't wait for the dyno run just to see what it really is making HP wise but that will have to wait. I want to get it sorted out a bit better and let it break in some more before taking it up to the 6000 redline. With the 1600 carbs set at one turn out from tight on the mixture screws she's idling at 900 rpm with a satisfying rump, rump, rump reminiscent of the old 60's musclecar cams. I also used my dremel tool with carbide burs and sanding discs to match up the carbs to the manifold and the manifold to the head, trying to get as little restriction as possible. Oil pressure from the 2L oil pump is approx. 75 lbs. cold and 65+ hot. For now the engine runs right where the 1600 engine did using the stock 1600 radiator and 160 degree thermostat and 4 blade fan I adapted from my old 510. It's been very hot up here in the NW, with some days getting to 106. On those days the temp was about midway up on the gauge....running around 195 to 200 like Steve said in his article. It did not overheat and puke anything out, but it did make me nervous for sure.

I'll email Steve some pics and for now that's about all I can think of for this article.