Sounds like its time to start a thread about the car and the progress. Excited for your journey
Simon
Current Cars:
-2017 BMW i3 "The Commuter"
-1975 Alfa Romeo Giulia Nuova Super 1300. "The Polluter"
Top

a few pics. The day we bought it, after it had it's first wash, and current pics.
You do not have the required permissions to view the files attached to this post.
Top

These are some great stories! Excellent idea, starting this thread, to learn how we all got bit by the Roadster bug.

For me, I had seen a few Roadsters and really liked their style. In 1992, living in San Jose, CA, my girlfriend said she wanted to buy a little convertible, but didn't know much about cars, and could I help. Sure. I showed her pictures of MG's, Alfas, Fiats, and Datsuns. I also mentioned the Japanese reliability of the latter, and the oil leaks and questionable electrics sometimes associated with the others. After a few test drives, she fell in love with a 1970 1600 and bought it from the original owners for $2000. It was bone stock, smog pump and all, and still wore all of its faded original silver paint. We drove all over in that car, and she learned how to do basic maintenance and got her hands dirty helping me with bigger jobs, too. In 1994 she decided to sell it, and since I'd fallen in love with the car by then, I bought it from her. It was my daily driver there in San Jose and later when I moved to Santa Monica. One highlight was driving with the top down on Route 66. In 1998 I got a job in Thailand, and the Roadster, by now with a leaky rear main seal and a bluish tint to its exhaust, was put into storage. Eventually I moved back to California, and the car has moved a few times with me, patiently waiting to be back on the road. Now that I finally have a sweet garage and a little more time, "Audrey" is currently getting the attention she deserves. 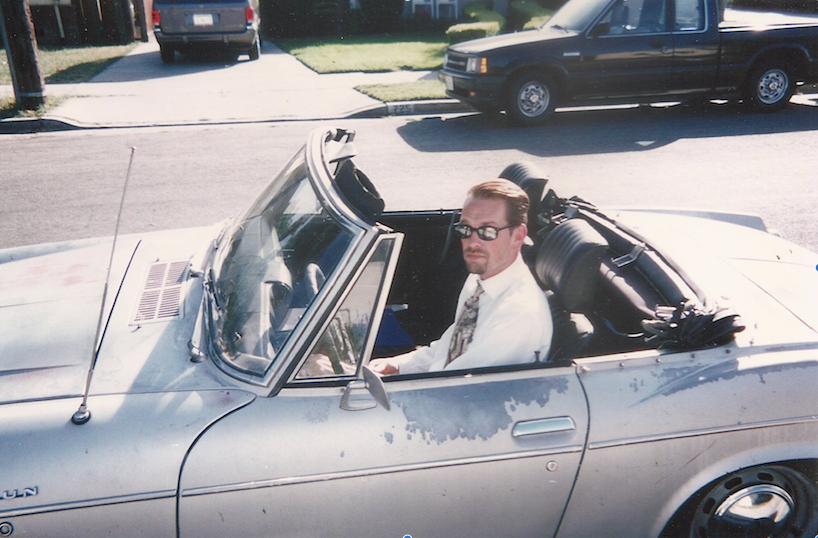 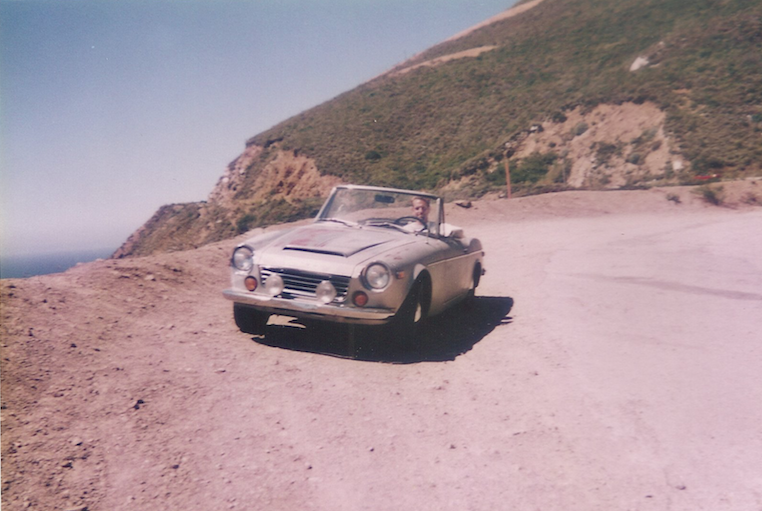 You still have the car, but what about the girlfriend?
"Wow, a Roadster!" Stuart Little

Was Audrey the GFs name?

Also, I vote to leave the original paint on it, in all of its patina'd glory.

The girlfriend and I aren't together anymore. It was a tumultuous relationship, but we're actually still friends and I went to her wedding years later. "Audrey" is named for Audrey Hepburn, who played Eliza Doolittle in, of course, My Fair Lady. Pretty transparent, I know. I have named my ugly duckling '70 parts car Eliza.

I agree about the paint (or lack thereof). It's only original once, right? My plan is to sort out all the mechanics and drive her with her natural patina for now. I am rebuilding the original R16 with a U20 crank for an R20 stroker. Engine is apart and goes to Rebello soon. If anyone is interested in the progress, I have a build thread here on 311s: viewtopic.php?f=29&t=19067&p=292950#p292950

In 1972 I test drove and immediately bought a Mazda RX2 because it was so smooooooth and fast. Along comes my cousin in a 69 2000 roadster and promptly beats me handily in a drag race. So I bought a red 69 with porthole hardtop. God I wish I had that car back. Wife and I drove that car all over creation for several years when we were in Bakersfield, CA, then sold it when we moved to Pocatello, Idaho in 1976. My cousin and his wife moved and lived with us and he kept his yellow 69 roadster and brought it with him. Later he moved back to CA and sold his to me. Again, we drove that one everywhere and on one trip across Nevada at a sustained 86 mph we averaged 32 mpg! Sold it for some stupid reason years later. Now have a 70 1600 stroker that hopefully is going to get a 69 U20 that I just got for FREE that purportedly had 67,000 miles on it when it was parked in the early 80s put in it. Nothing wrong with the stroker, but God, there is nothing like the scream of a 2L and full song!!
1968 510 Wagon
1970 Roadster 1600/U20/5 sp. swap
1972 510 4 dr. vg30e/5 sp. ricky racer
1971 510 shell behind the shop, r.i.p.

I drive a Roadster or 510 almost every day!
Top

Man oh man, has that story's essence been told to me time and time again when people approach us when we're out driving. Glad you're back in the family, still in love and ready for "Roadster, chapter three!" I fell in love over 33 years ago and never let go!
Greg Burrows
'67 2000 #588
Tacoma, WA
Top

My first encounter was around 15 when my sister's boyfriend drove his 2000 over and took me for a drive. Back then, we did not own cars and my interest and knowledge virtually nonexistent . Still, it must have left an imprint of some sort. Fast forward, as an adult with means, have enjoyed powerful and exotic cars but still lacked much interest in "small" cars. Only few years back that my interest in tiny cars became a reality. Thus, among the several "small" cars I own now, I decided to acquire this current 1965 1600 roadster mainly out of nostalgic sentiment and finally beginning to appreciate her charm and spirited character in real life.

I like the pic from 1992 of Eric, Funkaholic, in the post above. All neat and clean in white shirt and tie....very James Bondish...LOL

I have always enjoyed looking at old car photos. It seems like Funkaholic had a lot of great memories with his roadster.
Top

What the heck, here is the back story on my buying it. Have Kleenex handy.

35 or so years ago a pretty blond showed up to a friends house in a yellow 1600 roadster. About a year and a half later she lost her roadster to an engine fire, she did not have the money to get it rebuilt so bye bye roadster.
31 years ago we were married.
At least once a month after that for the next 30+ years she would look at everyone in the room, put a sad face on, and say "I miss my roadster".
When we had money, no good priced roadsters, when there was one at a good price, no money.
I just lost her to glioblastoma, they gave her six months to a year and a half, but she fought it to more than four years. That was three months ago. The week she went into the hospital for the last time this yellow 2000 roadster showed up for sale. I was hoping for another of her "No way, no one recovers from that" comebacks, but she was just too tired.
So I want this for trips through the West, like she did. Not restored for shows, but rebuilt for driving on the dusty, pebble strewn Nevada and Sierra two lane roads.

Okay, this is probably not going to be the most popular response. I did not buy my roadster because I was looking for a roadster for many years and always wanted one. The truth is, I needed a project to keep me busy and to keep my mind sharp. I am closing in on retirement. I am adamant that we should learn something new every 5 years to keep ourselves sharp. For example, 10 years ago, I learned bluegrass Mandolin. My most recent project was to restore a 120 year old pump organ (reed organ). It was a real learning experience! Anyway, I considered several cars. A bugeye was an option and I found one, but it went too fast. I wanted to learn how to weld as this is something I have never done. I am very good with the mechanics of cars and motorcycles. It had to have a unique following, be well supported with part and fellow enthusiasts expertise, be small and simple. The typical advice is to get the best car you can afford. One where someone has done all of the hard stuff. That was the opposite of what I was looking for; I wanted a project. I raced 240Z's in the 70's, so a Fairlady was high on my list from my past experience. When this one showed up it was just what I was was looking for. I am sure I paid too much, but what the heck. For me it is not about the money. It is about the love of the car, and hey, these have a "cool" factor that few others can match. So far, I have enjoyed reading the posts, pulling stuff off of the car and thinking about what the finished project will end up looking like. I am not trying to make the fastest Fairlady. I will let the others do that. I just want to put it back into operation and to look respectable. Still, I look forward to the drive. I had a 2000 Miata and now have a 2019. The 2019 is much faster, but lacks something in character of the older one. That is something difficult to explain. It is too refined maybe? I think the roadster will touch back on that raw feel and look cool as heck doing it! There are few vintage cars that match to coolness factor of the roadster.
Maybe someone will understand this. If not, I am sorry, but still happy with this project. I am in no hurry to finish. If I hurry, I will have to find another project!
Top

Those are damn good reasons to me! Good luck with the project and enjoy the journey!
"When all else fails, force prevails!" Ummm, we're gonna need a bigger hammer here.