The wife was looking at Honda S2000s and we test drove a couple. Underwhelmed. Sort of boring. Car only seemed happy above 4,000 RPM which is not practical in the city. I said what about a Datsun Roadster since I had owned a 510 and she once had 240Z. The rest is history. 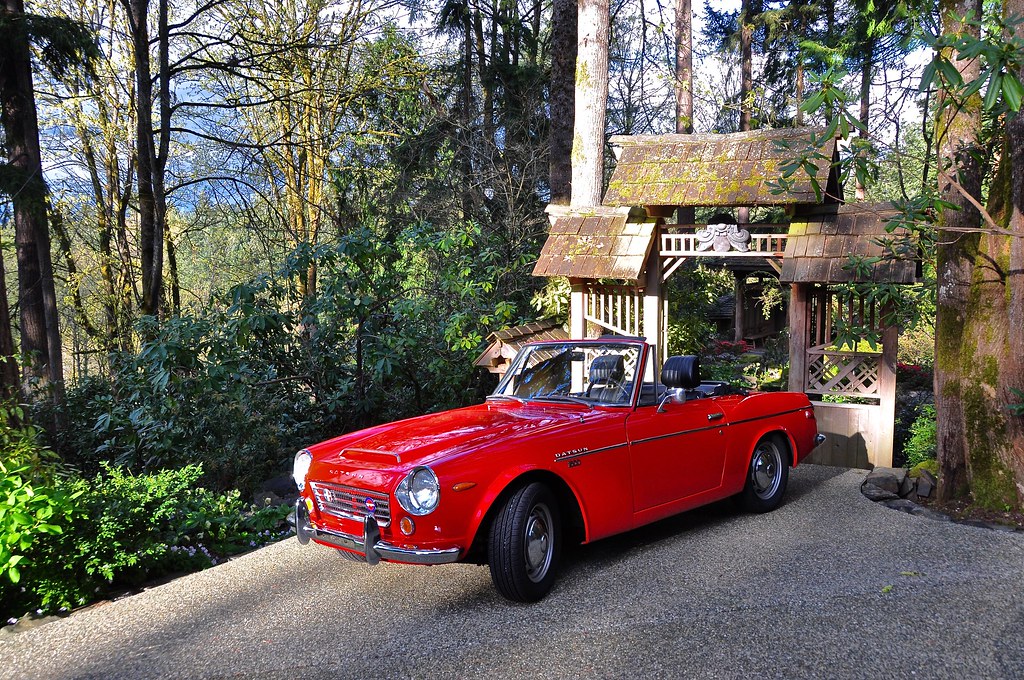 My dad had a 1600 years ago, sold it and got a 2000. I never saw either of the cars but I have heard about them time and time again. I have had one eye open for a good deal on a roadster for about a decade and finally a car landed on my lap. It has some issues, but it runs and drives and the issues are fixable. I'm in resto mode right now... Dad doesn't know about it yet
Josh
1968 1600 - Frame-on restoration.
1970 VW Bug - Long Course Offroad car in Class 11 build configuration
1995 BMW 318ti - Short course Rallyx Car with s50 M3 swap
2006 Subaru WRX - Daily driver and occasional Ice Racer.
Top

Congratulations PBJ, I am sure that you are enjoying the car. Post your location in addition to the pictures.
"Wow, a Roadster!" Stuart Little

spl310 wrote:Congratulations PBJ, I am sure that you are enjoying the car. Post your location in addition to the pictures.

Thanks, I started a thread in the introductions area, is there a good place to start a build thread or should I keep it all in my intro thread?
You do not have the required permissions to view the files attached to this post.
Josh
1968 1600 - Frame-on restoration.
1970 VW Bug - Long Course Offroad car in Class 11 build configuration
1995 BMW 318ti - Short course Rallyx Car with s50 M3 swap
2006 Subaru WRX - Daily driver and occasional Ice Racer.
Top

Here s OK, but a build thread is OK too! Whatever you are comfortable with.
"When all else fails, force prevails!" Ummm, we're gonna need a bigger hammer here.

I've actually been on the path for a Roadster for the better part of 10-12 years now. I knew what they were.. and I have always had an interest in them being an all around "Nissan & Datsun" guy. What really sealed the deal for me was back in 2005 I had the opportunity to go the the JCCS in Long Beach and cover it for Nissan Sport Magazine as I was a contributing editor. I put the word out (I think on this forum even) that I would be out in LA and was looking for cool Datsun/Nissan folks going to the show who might like to meet up and talk.. well Datsun & Nissan.

I got a message from a fine gentleman named Vic. Vic said he actually was friends with the folks who ran the show and he'd be "working' at the show and was planning on taking his 510 and his Roadster and since he was one person with two cars would I like to meet him early and drive one of the cars down. I jumped at the chance and we traded some phone calls and emails.

I got to LA and my friend (also a Nissan guy) whom I was staying with decided he wanted to get up at the crack of dawn (actually before) to ride down with me. So we drove over to Vic's place and Vic tosses us the keys to his 510 and says to follow him. Just like that... 10 mins of talking and we're off to McD's for a early bite before heading out. My friend Brian drove and I spent my time snapping various photos and just taking in the glory of Vic's 510.

After a full day at the show and taking photos for possible future features (most of which never happened because the mag folded up) it was time to roll out. Vic tosses me the keys and said "you HAVE to drive the roadster... you didn't come all this way not to" and then something to the effect of "just follow me and keep up" with a bit of a rye smile. We blasted back from Long Beach at what seemed break neck speed and me trailing hard on Vic through traffic trying to not get lost. There was a point we hit stopped/slow traffic and I look over and the people in the car next to me are going "Hey man that's a awesome car.. what is that!??" Datsun I said... and off we went again. I got numerous thumbs up and "looks" the whole way. It was amazing. Wringing that car out on the LA interstate and just feeling the cool LA evening air and all the wonderful carb'd and cam'd noises I was hooked.

So that's it... I spent the next 10 years wanting one but always having other projects looming... then I saw Vic had health issues and his roadster went up for raffle (not ashamed to admit I spent a few $$ buying tickets hoping!) and it's always been in the back of my mind... the right car would come along... I dunno if its the right one.. but it came along!

A shot of Vic I snapped that day.... Thanks for being more than generous with your toys to a complete stranger and spreading your love of the roadster. Wow man, what a great story, and a wonderful example of the impact we can have on each other. Vic showed you what it was like to be a "Roadster" person, stoked your love for the car so it lasted for years, and now you're here to share YOUR adventure with your own car... It's come full circle.
Welcome to the family!
Greg Burrows
'67 2000 #588
Tacoma, WA
Top

Gotta love Victor, every roadster story with his name in it inspires good feelings. Great photo
Dave Brisco
Take my advice, I'm not using it"

A good friend of mine had called if I was interested in buying a Roadster. I had no Idea what it was so I went home thinking this guy is messing with me. He told me that he is about to get married and he needed money. He also mentioned that he had hurted his back so he can longer finish what he had started. He sold most of his other cars but he left the Roadster for me. "I still wanna see this when you're done" he said. He was selling it for 4k and I laughed. When i think about it, I was a fool for laughing not knowing the value of the car. I offered him 2k and I don't regret buying it knowing someday.....someday I'll be able to show him the car when its complete.
Top

It was the cool car in high school. I saw it and wanted it. I got it 45 years later.
Bob
Orinda, CA

I was really looking for a 356 replica or pre '68 beetle convertible. A couple guys on another forum have 1600 high windshield that made me do some research. Started looking for either a high windshield 2000, or the 63/64 3 seater. Found this one for much less than I was planning on spending, had it shipped and here we are.
64 3 seater 1500
72 Vespa small frame 90
60 VW Ragtop Bug
Top

By accident, I went to check out a few cars for sale that I was thinking of buying when I stumbled upon a 66 Datsun 1600. I initially thought it was a MG from a distance. I seen Datsun 1600 on the fender, the neat 4 cyl. with its aluminum valve cover & side cards & a dash that looked like a cockpit on an airplane. I purchased the car for $1900 complete with convertible top, hardtop original black plates on a non-op & a lot of extra parts. I got it home, fired it up, it needs a few things to make it road worthy. I have a few muscle cars & that's what I work on but I have to admit that I have roadster fever! All the little touches & options that the Datsun roadsters have are very unique. Can't wait to get it back on the road & drive it! I've been doing a lot of research & im impressed on the following of the Datsun roadsters, I think it's great!
Greg
72 goon ka24de
64 nova ss
68 camaro ss
65 chevelle conv.
2012 dodge diesel 4x4
Coarsegold, CA
Top

Welcome Greg! You will find the Roadster to be a bit different from the muscle car, but I'm glad you're falling in love! These really are fun cars, and if the power isn't where you want it there are options going forward. I still want to build a FI turbo charged R16...
Greg Burrows
'67 2000 #588
Tacoma, WA
Top
222 posts