Datsun.David wrote:Nice to see another one hit the big time auction...

I was initially put off buy the rusty thermostat tower. If the rust is that obvious, who knows what's hidden. My guess $19k.
Top

Nice looker, will mkae someone happy. Has a few minor projects.
Never seen a 1600 fan shroud (deep) used on a 2000, but leaves a clean look. Maybe he made it 2-pc, so easier to remove as well.
I'd take the fuel line out around the radiator too, especially if I had worked on Z cars that were prone to vapor lock. (more mechanics are familiar with those, and see the similarities)
Interior looks clean.
Fergus O
69 2L, SUs (driver, not susceptible to polish)
02 Tacoma 4 door (sold at 300k miles!)
2017 Honda Ridgeline (2021 purchase)
Los Alamitos, CA
Top

I'm with the under $20K crowd. I attended the Mecum auction in Orlando back in February where they said they had 3000 cars to auction and I didn't see a single Japanese car. What they did have was endless lines of American muscle cars crossing the block....it was a very long day. Regardless of this cars condition and correctness finding two people at a Mecum auction that will bid up a roadster to the level we saw at Amelia Island is probably a stretch. I might get smacked around a little bit for this but I'm predicting a no sale at a bid of around $15K. Hey...were just having a friendly conversation here...Right?
Top

the thermostat elbow that shows rust should be aluminum and not steel. Perhaps someone has replaced it with a non original part to replace a cracked or pitted aluminum elbow.

Steve is right that Mecum is mostly American muscle - so there won't be as many Import bidders as as Amelia. I checked out the list and there are still some European cars and a z or two - but mostly America. Maybe I should go - I can get a good deal on a Ferrari??? Nah, not in Houston - too much money floating around right now.

I live in Houston and I am just finishing up on my rolling resto of my 71 240Z. But I have had the itch for a roadster since I first saw one.

This one showed up at mecum here in Houston and I was interested.

I see the wonky mirrors, and the black engine bay and the questionable wheels, and I say well maybe if it is reasonable.

But here is a bit of trivia.

That EXACT same car sold last September in DALLAS at mecum for ... wait for it... 4000 dollars flat. The new owner has since put shiney wheels (ugly) and an upper radiater hose (notice the new sticker he did not bother to remove) and not much else.

The 150Hp in the article is a joke considering it does not have the appropriate Solex/Webber/Mikuni to get it there. So we are talking about a questionable car flipper here looking to make a quick buck. Is it worth passing over this one. I do not like feeding the car flipping rolls that are killing our hobby. But at the same time, if the reserve is low enough, then maybe it is worth it. 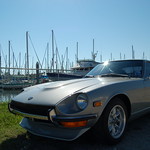 The auction game is a sticky one... Hard to blame a guy for buying the car at Mecum for $4k. Really, most of us likely would have too. One of the opportunities that comes from chasing imports at predominantly muscle car auctions... You might have the same opportunity this year.

Ultimately, if the car is solid, and it appears to be for the most part, buddy stands to make some cash. Don't write him off as a flipper for being in the right place at the right time - and don't miss the opportunity yourself on a "principle" that may or may not hold water under scrutiny. The thing about these cars at auction is that the descriptions are almost always flawed, because it ain't a big block hemi with... fill-in-the-appropriate-mopar-accessory...

I am going and I will be registered to bid. The car has a reserve on it now, so I will bid cautiously. Again, I think the primary clientele at Mecum is looking for the uber rare camaro with factory orginal air in the tires that never saw a drop of water on it, or has never been driven ever. You know the types. Where every car is a barn find now, and it is all only original once.

I will drive it home if I can get it for less than 10k.

Zedyone_Kenobi wrote:
I see the wonky mirrors, and the black engine bay and the questionable wheels...
...The new owner has since put shiney wheels (ugly) and

WOW! Good to know I'm not the only one who thinks those wheels are hideous

Welcome Zedyone. If someone bought that car for $4K they got a helluva deal. So don't let that one sway you.

I'm in Houston and have laid eyes (and wrenches) on a few roadsters. I see this one is selling on Thursday - and I have a pretty busy work-day on Thursday. Is there an earlier time to go view the car? I can go w/ you to view it if you'd like.

Not only that you have to pay 20 bucks to get in to see the car, then if you want to become a bidder, you have to pay an additional 100 to bid on it. So I plan to go early thursday and pay my 20 bucks to see it. Then if it something I can enjoy for a while and do a rolling restoration like I did on my Z I will try to bid. I just wish I knew the reserve so I can tell if it is worth my time. I will wear a BRE Z shirt so if you come we can chat. I will end up with a roadster for sure, maybe it will be this one, may be not.

Anyway, thanks for the welcome. My heart is in this, my head my need convincing.

Lot T63 is set to scheduled for sometime on Thursday.

Just got this in email, Thursday's TV coverage....set your DVRs.

I like those wheels!
"Wow, a Roadster!" Stuart Little