It’s all about design...

It’s all about design...

So we all stare endlessly at our beloved roadsters, admit it or not. Is there a specific design feature that you just love , is there a feature you wish they left out? Is there a design feature you wish they included? Is there a custom feature you’ve added to set your roadster apart? Do share!!!
For me , two design features stand out that separate it from the bland. First is the subtle hood scoop, functional or not. It just adds some brawn to a not so brawny design. Second feature are the rear lights. So classic , distinctive, and just look so freakin cool.
Something small but I redid my center consol, and put the shifter plate under the console as opposed to on top. I think it looks cleaner.
Customized my driving light covers . Looks good and functional
You do not have the required permissions to view the files attached to this post.
datsun510 1971 past
Triumph GT6 1968 past
Austin Healey 100-6 1957 past
Infiniti G37Xs 2009 current
Datsun 2000 solex 1968 current
Top

Have to agree with tailights (rocket engine exhausts).

You both hit it. to me, the rear fenders and the taillights are the perfect combo. I also like the scoops at the headlights. You can really see the design morph into the early Z's. They also mitigate what would have been a rather boxy front.
Rick
Constantly working on the Datsun whenever I get around to it.

To me it's the front fenders to the front and the hood with its scoop when viewed from side at about where the front wheel is. I never get tired of looking at the car.
Greg Burrows
'67 2000 #588
Tacoma, WA
Top

This was James Doh's styling analysis from 1999. He is a roadster owner and artist. To me, captures the Datsun Roadster perfectly and is probably shared by most

The overall impression when one sees the car is of instant friendship. The large headlamps and "smiling" grille warm you to the car instantly. The styling is not the pure form studies of the Italian 'verts but falls in well with the German, and English cars of the same era. With more detailing and body surface transitions than either, the Datsun makes its own strong statement.

The strongest form theme is the strong taper to the rear (back in vouge with the Buick Riviera, EV1 and somewhat the J30). Most apparent and undisguised in rear view, the sharp cut kamm tail further define the rear corners of the car; visibly narrower than the mid section. The tailfins keep a broad rear quarter panel surface, keeping the rear from looking too fragile. Without the fins, the rear would resolve much like the Alfa Romeo Spyder/ Giulietta with a continuous rounded shoulder to the boattail of the original, or kamm rear of the later Spyders.

The front and rear are both its strongest visual statement and weakest area
Both ends of the car have strong easily identifiable elements that, taken as a whole, give a strong and unforgettable impression. The large lamps and happy front end makes everyone smile. The four bullet taillights and two reflectors continue the shapes of the front lamps, but while the headlights are recessed (visually pushed in by the air), the taillights are extruded from the body (metaphor of rocket exhaust). These subtle cues accentuate the short front overhang and long tail; a nice touch.

At the same time, the large lamps and multitude of horizontal elements conspire to narrow the front end (horizontal elements usually give the effect of widening the car, but in this case all the horizontal shapes stay inbetween the headlights creating a stacked upright effect). The rear end is finicky. Many small details (trunklid lip, emblems, gas cap, lights) compete for the small amount of real estate on the kamm section of the tail.

Upon close inspection, the Datsun delights with its details. The chrome bodyside trim was necessary to hide the manufacture of seperate panels. The 60's Honda S800 did the same thing with a chrome strip running the length of the car at the top of the fenders. The placement on the Datsun is at the ideal horizion line reflection, becoming the highlight where the sun would reflect at "magic hour".

If you look at the car in plan view, you will notice something very crucial; continuity. See the subtle bonelines in the front fenders? They offset the large (in comparison) rear fender fins. The ridge running the center of the hood is still there on the trunklid. The hood scoop is essentially a smaller form raised off the main one and the small lip at the end of the trunklid is that, too (notice the opposing emphasis; subtle front fenders to large rear, and large scoop to subtle rear). Of course, the hood crease and kamm tail and lights are consistent front to rear.

There is an overall harmony and sophistication to the design that goes beyond its surface charm to be sure. It is one of those cars that discoveries are made while washing it!

The Datsun has been compared to and dismissed as a copy of the MGB. I think the confusion lies in the casual observer's impression both cars exude, namely a 60's definition of open air motoring and the common site of British 'verts. In fact, the Datsun was introduced before the MGB so claims of imitation are invalid.

The closest redesign ot the Fairlady roadster may have been Nissan's 'kei' car, the Figaro. Although much smaller and not a full convertible, it nonetheless carries an unmistakable lineage with the roadster. Starting from the front, it has a smoothly rounded yet upright nose that is very similar to the Datsun. It frames two headlamps and two small signal lights, as the Datsun does. The chrome light trim comes to a point (backwards, this time). It is interesting to note the chrome trim treatment that is identical to the Honda S800.

The same four, chrome bezeled taillights (reflectors are not needed, as the taillights are larger and modern lenses have reflectors intergrated into the surface), but inverted into the body this time. It carries the simple signature blade bumpers, too. The interior mimics the early (and best) dashboards with a dark padded vinyl surround and light grey surface.

Immensely popular at its introduction circa 1991, the Figaro was on a wave of retro-mini cars from Nissan that included the Chapeau, Saurus, and S-Cargo. Compared to everything from a 50's Chevy to a 60's Mercedes, I believe Nissan drew on our forgotten charmer for its inspiration. The Figaro, Nissan's quietly forgotten son- blown up 20% larger may have been the Fairlady we were looking for.

It is nice to see the comparisons of old and new (see "then and now" above), and how designers stay true to the original concept and design. It is a testament that things were really done right and on track back then. Honda paid homage to the S800 with the mid-engine Beat (also a 'kei' car), the Miata is a dead ringer for a modern Elan and I think Nissan should follow suit, don't you? Incidentally, my favorite modified is the Rose Auto Fairlady on Gordon Glasgow's site. A footnote: The MGF was intended to be a Honda and the influence is very obvious. It is basically an enlarged Honda Beat and rear end is an Acura Legend coupe in miniature; sweet justice for Japanese cars dismissed as copies of the Brits!
Alvin Gogineni
San Jose, CA
1967.5 SPL/SR20
1997 Acura Integra GS-R
2013 Prius V wagon
zcarblog.com
Instagram
YouTube
My SR20 Build Thread
Top

To me that’s exactly it!
I’m often asked why a Datsun Roadster and where did that come from, I tell them the story of how while researching for a Speedster to replace my PCar I saw the picture below and it was basically love at first sight and I started to learn about it I had to have one. And then I show them the picture and they get it

As an official car nut I was surprised I had never seen one before that I remembered since the visual from that angle is so powerful, to me it has all the masculinity of the Italians of that era but with added “purpose” and agressivitty

Not to rain on a good parade, but:

“Datsun 2000: Great looks it doesn’t have – but who cares?” “With a robust single-overhead cam engine and a sinfully smooth five-speed transmission, we wouldn’t miss a chance at driving the Datsun 2000 if it looked like a peach crate.” Car and Driver, June 1968.

Shame that this road test couldn’t be included in the Brooklands Datsun Roadsters 1962-1971 compilation, b/c the C&D article is one of the best-written (and most entertaining) road tests of the era. Too, it was among the very first to corroborate the Datsun advertising which claimed an indicated 100 mph in third gear from a showroom stock SU-equipped U20.

Funny, how our tastes can change over the years. When I first bought mine in 1972 I really liked the front view, but hated the rear. Now the rear is one of my favorite styling cues. The only thing that I think could be improved on is the transition of the rear fin where it blends in right behind the door. It's looks a little "frumpy" to me and I think a little smoother arc would look nicer.
Mike M
1969 2000 solex mine since 1972, under resurrection. (Finally resurrected as of spring 2019!) 1969 Porsche 911s -worth more, but not as valuable! (Soon to be resurrected)
Top

I too struggle with which view I like best... lately, its been the rear. I just love the way the car has its flared quarter panels, and then gets narrower toward the back... 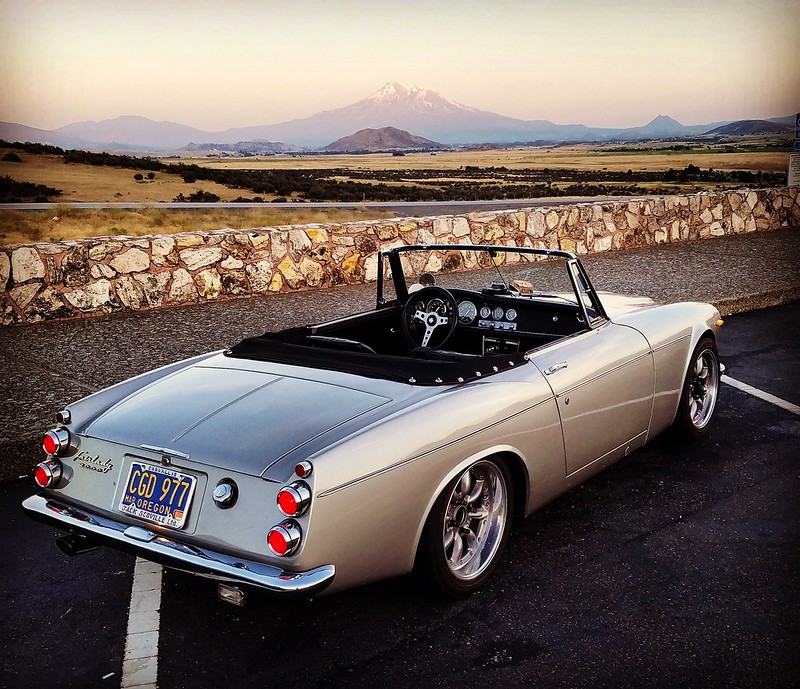 Maybe the most detailed analysis (with visual aids) of the 311 design features:

Plenty of points therein for debate.

I agree the designers didn't do this:
"The Datsun has been compared to and dismissed as a copy of the MGB. I think the confusion lies in the casual observer's impression both cars exude, namely a 60's definition of open air motoring and the common site of British 'verts. In fact, the Datsun was introduced before the MGB so claims of imitation are invalid."

Once I saw this one from late 50's ...
Spyder.jpg
it got me thinking the designers may have made a trip to Italy with their sketch books.
You do not have the required permissions to view the files attached to this post.
Ralph