I am 16 and I was looking at Miatas for a first car but then I chanced upon a '68 2000 and my friend Pete Brock said BUY IT! The car had been siting for years and the breaks were shot. The floorboards were also getting pretty thin. My dad had a Spitfire and a Alfa Duetto but I think my Datsun is better than both.
Oil a little low? Time to get a longer dipstick:)
Instagram!!!
1968 2000 SRL311-05110 (first car! Rust Bucket. Sold

You are very wise for a 16 yearold!

If your friend is Pete Brock, you listen carefully and DO EVERYTHING SINGLE THING HE TELLS YOU TO DO!

He is an ICON in the automotive world and a LEGEND in Datsun circles. And in my limited conversations with him, a damn nice guy.

I bought a roadster because I could not find a 356C which could be driven for 500 bucks in 72.
And my best friend and a friend of his owned roadsters. So after the 500 bucks and a running
3 main block came a 5 main short block, 2L crank. rods, pistons
oil pan, 2 liter harmonic dampener, cam grind, chrome, hood, headers, larger diameter exhaust, aluminum flywheel and swap to a 68 frame
fenders side lights and paint. Roll bar and gauges too.

My name is Jim and I'm a Datsun Roadster Aficionado.

I'm hanging my head in shame here because I had just sold my MGB and was looking for a new toy.

The character that had my 69, 2000 had a listing on Craigslist and he put KEYWORDS in the listing. ONE of which was MG.

Well, THAT did me in. I mean what was I to do? I was trapped. Trapped I tell you. Rather like a comely woman in the airport bar........

I too was sucked in by keyword spamming many years ago. An ad for parts, looked innocent enough, and then the ad says "Ask about the Datsun Roadster I have for sale" Soon some unsavory character sold me a non-running roadster he got from some other shady guy. Then he did it a few more times .
Dave Brisco
Take my advice, I'm not using it"

Almost 20 years ago, fresh out of rehab, I decided against driving my old car, as it knew the way to every bar, liquor store, and strip club around. I sold it, and realized there was absolutely no reason I needed a practical car - I didn't have anything (that wouldn't fit in the roadster) or anybody to haul around. One thing I could think of that I enjoyed that was driving Oregon's country roads.

I was at one of those meetings admiring a thoroughly beat up 67 roadster in the parking lot when the dude offered to sell it to me. Deal done, I drove it for six months before realizing some of it's endearing issues needed attention (the road going by beneath my feet, the stacked head gaskets, the lack of any kind of top in Oregon, etc). I had finagled a shop space by then, so I pulled it in and started taking it apart (entirely).
That and putting it back together kept me out of trouble for the next 3 years, and now 16 years later I have the body off the frame again, almost ready for paint, and making some other improvements (new tranny, suspension, better brakes, fresh chrome and glass) I couldn't afford the first time, and fixing some damage that occurred over the years (like a snow laden carport falling on it). I figure it deserves it.
Michael
67 1600 > 2600
Top

Around 1999 I was living in Colorado. I already owned a 260z and got a company truck. Therefore I had a small budget for another impractical car. I was looking at MGs, Alfas, Triumphs, etc. Started to see Datsun roadsters in the paper for sale and checked out a couple. I knew about them but don't recall ever seeing one in person before. I was intrigued because they weren't common, looked cool, and I already owned a Datsun 260Z. I thought it would be a good companion.

I ended up buying a 69 2000 for $1200 that wasn't driveable. I worked on it and turned it into a reliable driver. A couple years later I sold it as I was moving back east and I wouldn't have a company truck. Therefore I needed to buy something I could use all year as a daily driver. An 84 RX7 filled that role. I had more history with my Z and wasn't ready to part with it yet which is why I sold the roadster.

My interest in roadsters stemmed from a mix of interests in ZXs and top-down, 2-seater sports cars. Stationed in northern Honshu, Japan in the mid- to late-'60s, I first saw a Z on the main street of Misawa in 1968 and immediately fell in love with its style and design. As fleeting as my glimpse was, I never forgot it. Not officially produced and released for sale until 1969, I may have seen a road test model or marketing tour out of the Tokyo area.

I returned to the world soon after and my father and brother presented me with a Fiat Spider with a ¾ OSCA racing cam, a car they had rescued and hurriedly put back together for my return. Enjoyed the freedom of that sports car while driving up and down I-95 for a few months while I finished out my enlistment at Andrews AFB - until my brother wrecked it. Painted a muddy gray-brown, it wasn't the prettiest but I guess it's the thought that counts.

In the early '80s, I owned a red 1980 280ZX, then a gold 1981 280ZX Turbo, and then a black 1983 280ZX Turbo (one of the loves of my life) with leather and digital off the showroom floor, in succession. After early retirement from DuPont in the mid-'80s, I found a 1968 1600 on a Nissan dealer's back lot in Delaware and scarfed it up because of the Roadster/Z lineage. Carb overflowed with an electric fuel pump until I restricted the fuel line with a pipe clamp and lucked into the right pressure. Had fun with it for awhile and started taking it down for restoration until other things got in the way in the form of a couple businesses (life gets in the way of living, right?). 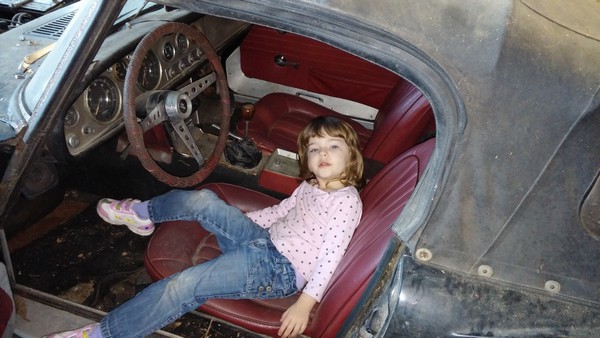 I like black cars with red interiors. Put that one on the front burner!
"Wow, a Roadster!" Stuart Little

A lot of great stories in this thread.

I've been into Datsuns of all kinds for about 25 years, having owned 40+ of them, at least half of which were 510s. Yet oddly never once a Roadster.

Through 510s I happened to meet a really nice fellow named Micheal Spreadbury. Back in the mid-to-late 2000s I was doing a lot of work for Super Street, and was fortunate enough to get two of Micheal's creations into the magazine. Having seen what could be done with them, I have been off and on toying with the idea of building one ever since.

Recently, with my 1200 project nearing completion, I started looking around for what the inevitable next project would be. After looking at a lot of 510s for sale, I decided that instead of building yet another one of those, I would finally tackle the one Datsun I've never owned.

Simple, I showed up to a roadster meet with the wrong type of roadster (on the right): 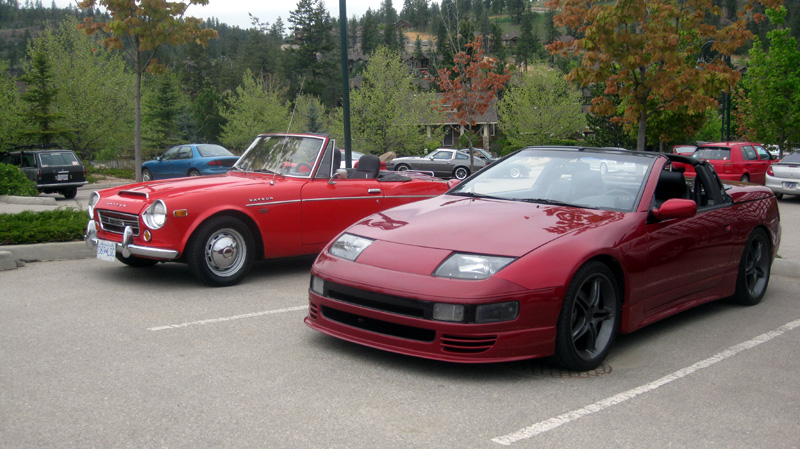 By the next year's meet, I had obtained the correct type of roadster: 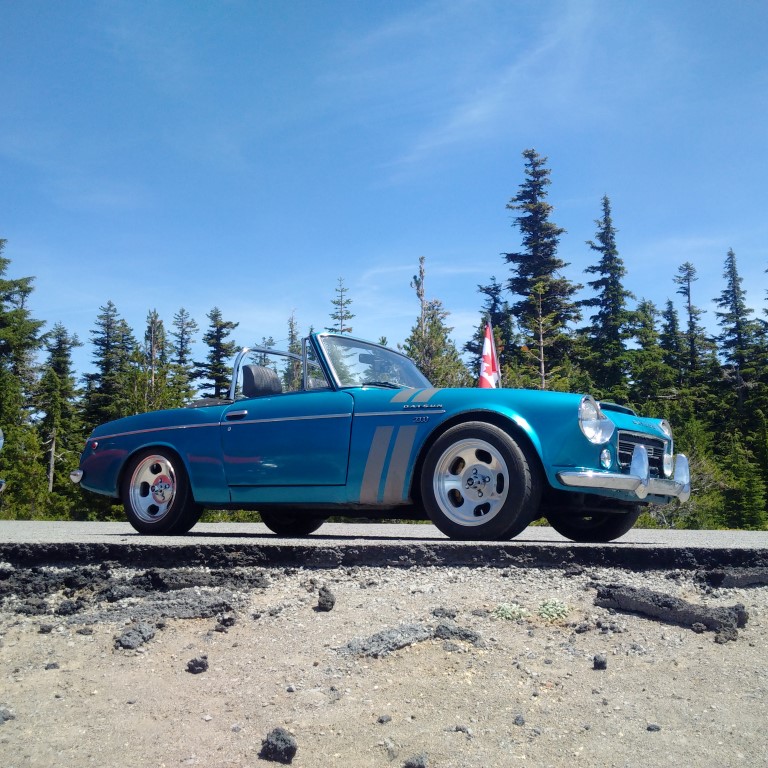 I may have posted this before - many moons ago.
I wanted to get off 2 wheels (Honda CB350 - loved it, drove across country on it) but tired of being an accidental target.
Originally I was looking at a 56-7 Chevy, and a friend suggested a Roadster. There was a shop on Lincoln (in Santa Monica) that sold/serviced them.
Went down, drove a 2K with Solex, broke the tires all the way down Venice Blvd, decided that I would be in Jail - so settled for Sora Blue 1600 (618 ADI) and just loved it.
Peter Harrison
1970 1600 (Stroker) - TOAD SAN (Eliza)
1970 1600 (Stock) - As Yet Unnamed
Lake Balboa (SFV) , California
Top
219 posts